There is a very interesting concept in Rig Veda in regard to creation. It is called a “Brick” of creation. We build our homes and buildings with bricks. Similarly, the Universe is said to be constructed from the divine bricks. These bricks are highly symbolic. Let us intuitively see how: 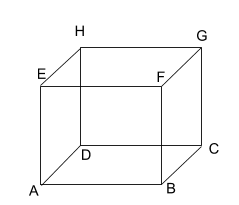 Let us consider, for simplicity, the brick is a solid cube. It has

Each number that this cube is associated with represents peculiar group of angels or dēvās that govern the construction of this Universe.

6 Surfaces: A surface is like a face which is visible and perceivable. The six surfaces of a cube are the six faces of “Kumāra”, the brother of Ganesha. Kumāra is said to be the lord of armies of dēvās. So, the perceivable faces of this cube represent the many groups of dēvās ready to march for the sake of creating the Universe.

8 Corners: The number 8 is often associated with “Vasus”. VASU is a dēva or an angel who is responsible for the manifestation of physical worlds. The 8 groups of Vasūs are responsible for the 8 prakṛtīs or Aṣṭa prakṛtīs that forms the matrix fabric of this creation. So, the 8 corners represent the 8 fundamental corner stones of plane of Vasūs for the manifestation to occur.

12 Edges: An edge is characterised by the line segment. A line segment is symbolic of a RAY and the 12 number is associated with the “Dvādaśa Āditya” – 12 SUNS. The 12 SUNS does not mean the 12 physical suns, but it means the seed principles of 12 kinds of suns. With respect to our existence, the nearest such group of seed SUNS manifested as 7 + 5. The 7 SUNS are the “Sapta Ṛishi Mandala” or that which we call as “Seven Stars” system. Among the rest of the 5 SUNS, our SUN is one. It is said that the 7 are higher in evolution and hence teach the lower suns (and their planets) the art of evolution. The stories of Dhruva, etc., in the purāṇās pertain to this aspect! So, the basic source of any existence, which is the SUN, is depicted by the 12 edges of the cube.

16 Diagonals: A diagonal is also like a ray. But we do not see the, in a brick, but they are potentially there! The number 16 is always, without any doubt, attributed to the MOTHER GODDESS as well as to the MOON, with the name “Ṣōḍasī (16) or Ṣōḍasa Kaḷā Nidhi”. A moon shows 15 phases and the 16th aspect that permeates all the 15 phases (the MOTHER) included will give in total the 16 phases. Each phase is a mode of expression. Just like we have mood swings to our mind (which derive their nature from the moon phases), the Universe too has different modes of its existence. These modes are called “Manvantarās” or the grand eons of time! Removing the “No moon” phase (which is technically not a phase of moon per se, but only the absence of moon) and the Permeating goddess (16th phase as we called it) the actually occurring phases are 14. There are 14 Manvantarās during which the Universe is said to evolve and exist in different modes/phases. These 14 manvantarās are different in magnitude for different systems viz, mineral, plant, animal, human, planetary, solar, galaxies, etc. That is why, when we say we are in so and so yuga, we need to specify the reference of system which we are speaking to (plants can be in one manvantara or yuga and the planets can be in some other manvantara or yuga, due to this difference in measures of cycles of time)! At any rate, these 16 diagonals represent the 14 manvantarās with the dissolution stage of creation (no moon phase) as well as the permeating aspect of GODDESS without which, nothing would have had a base to exist!

24 Right Angles: A right angle is characterized by 90 degrees. In the 360 degree set, 90 degrees form 1/4 th part. Our famous example, which we often take, the stages of word – Parā, Paśyaṃti, Madhyama and Vaikharī; The only perceivable and audible stage is the “Vaikharī” which is also 1/4th of the total utterance. So, a right angle denotes the fourth stage of utterance i.e., physical utterance. Where are these angles? They are at each corner. We have said earlier that each corner corresponds to the 8-fold NATURE of VASŪS, which are lords of manifestation. Thus, the 24 right angles denote the play of 8 vasūs in manifestation. How did we get 24? is it not by 3(right angles) x 8 (corners)? We have explored this formula of 3 x 8 = 24 in the article on 21) Gayatri & The Mantra. Thus, the 24 right angles denote the play of “GAYATRI” which is the heart of the vēdās. So, the divisions of day into 24 hours, the divisions of year cycles into 24 parvās or lunations (12 full moon and 12 no moon phases make an year cycle), etc., are represented by this set of 24 angles. That is nothing but the play of the GAYATRI as seasonal “splendor” on our Earth.

So, the basic brick of our creation consists of the armies of Kumara who are ready to enact (6 sides), the basic angels of materialization of the 8-fold NATURE (8 corners), the leaders of solar systems who guide the souls of beings (including the planetary deities) into higher states of evolution – 12 Ādityās (12 edges or rays), the modes of universal existence symbolized by the 16 phases of the moon which include the 14 manvantarās, dissolution and the permeation aspects of GODDESS (16 diagonals) and the play of GAYATRI or the periodic symphony that creates the splendors of LIFE of flora and fauna on every planetary body (in its state of existence – need not be our own visible plants and animals).

This is called the BRICK of creation and this verily encapsulates the basic minimum to create a Universe! Just in one brick how much depth did our sages dive into?!

Published by Hints to the Ancient Wisdom.

I pursued my post graduation in Physics from IIT Madras and I am presently a doctoral candidate in the field of laser and matter interaction. Along with physics, I have invested my time in understanding spirituality, philosophy, esoteric astrology etc. This blog is the essence of my understanding over the years. Most of my blog articles are strongly inspired from following authors: Master. E. K (My GURU), Sri Aurobindo, H. P. Blavatsky, Alice. A. Bailey, Sir John Woodroffe/Arthur Avalon, Sri Anantacharya (Master. E. K's father) and many more. I bow at their lotus feet for the wisdom they showered upon this world and letting me taste at least a drop of that vast ocean! View all posts by Hints to the Ancient Wisdom.

Want to find anything ?

© [K. N. R. Tejaswi] and [https://ardentdisciple.wordpress.com/], [2015-current year]. Unauthorized use and/or duplication of the material of this blog without express and written permission from this site’s author and/or owner is strictly prohibited. Excerpts and links may be used, provided that full and clear credit is given to [K. N. R. Tejaswi] and [https://ardentdisciple.wordpress.com/] with appropriate and specific direction to the original content.