Long back we touched upon the basics of astrology in 8) Astrology and Karma Theory and Astrology Basics (part-1) There, we have seen the correct approach to understand what astrology is all about. I suggest you to visit them for a brief recap. In the present article, let us go into some of the particulars of astrology. Just note that we are not going to go through the reasoning of astrology again, as we extensively dealt with it in the aforementioned articles. In this article we plainly go through the skeleton of astrology.

Astrology is often called as the “Language of Gods“. Do you know why? Because, gods’ abode is the celestial space (and also inside us – which can be understood by proper correspondence) and the events happening “above” were discovered to have a direct link to the events happening in our world “below”, and that is why it is understood as a language of gods i.e., as above so below. What they mean is, by understanding the phenomena of the heavens or the skies, we can understand those of the Earth (and its beings). Let us go systematically into the elements of this language. 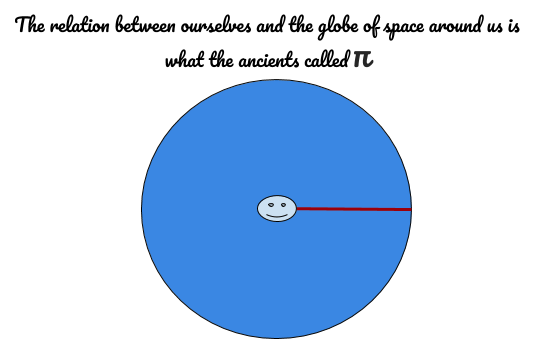 A human becomes the center of space that surrounds him. By symmetry of observation, space around him takes the simplest form of a sphere and is often called a GLOBE of Space – “Kha-Gōḷa/Globe of brilliance“. Taking our bodily outer periphery of what we define as “ourselves“, as the center of perception, whatever exists in this space of globe, starting from the immediate surroundings up to the immeasurable depths of vast spaces, form the Sphere(s) of Influence.

We may think that we are separate from this globe of influence and hence are not related to it or its elements, but a close and systematic research will reveal the secret that we are indeed part of an interconnected network of forces. For this reason, we call it the Uni-verse. This interconnectedness is the key and backbone for the subject of astrology. This connection is understood by the ancient seers as “Poimandres” or the symbol “π” which relates the radius – our connection  to the surroundings and the circumference – periphery of the globe of perception.

This sphere of influence can be divided into the following sets:

These three form a basic set of elements for the language of astrology. let us go through them in reverse order i.e., from without to within.

The Belt of Space: 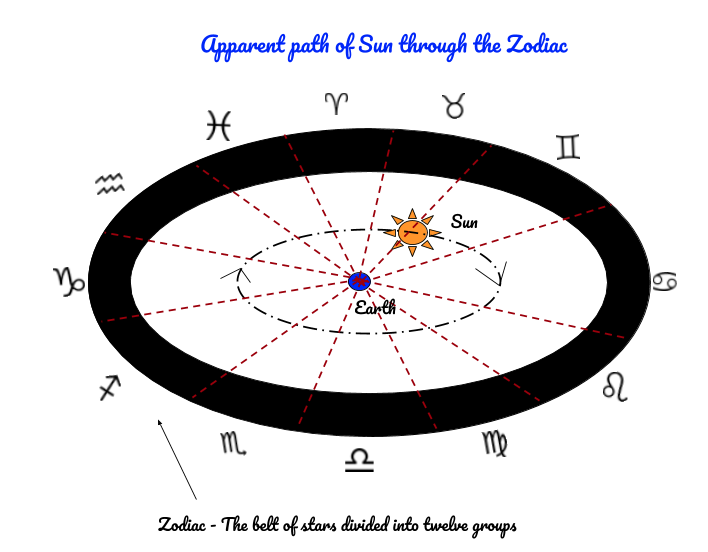 When we look from equator, our SUN seems to revolve around the Earth, and straight above our heads, there is a belt of space that is concentric backdrop to to this path of SUN. This space of belt has innumerable stars (or solar systems) in it. The above picture gives  a pictorial view of this. This belt of space is divided into many divisions in the scriptures of wisdom. But it is only in Indian wisdom-mines can we see the complete division scheme of this belt starting from 1, 2,… 5….12,…360,…720 divisions. Each division has a purpose. Just like we divide our daily routine into hours, or a plot of space into different room spaces, the seers divided this belt of space into certain number of sectors. The most prominent and widely used division, which is in vogue even today, is the division of this space into 12 and 27/28 parts. When we divide the belt of space into 12 equal parts, that division is named ZODIAC or RĀŚI. When we divide the same belt of space into 27/28 parts, that division is called ASTERISM/NAKSHATRA. In this article, let us deal with zodiac and leave Nakshatra division for a future article.

Now, consider the SUN’s apparent path. When we look from the Equator, this belt acts as a backdrop for its path (see the figure above). So, it gives us the impression that the SUN exists in one of these divisions at a given moment and is progressing day by day into another. Not only Sun, so do all other planets as observed from Earth’s equator. The divisions of this belt of space have certain effects on Earth/planets and beings therein. These effects cumulatively are recorded into the stories and allegories related to the name(s) of that division, in our scriptures. That is why they are named ZODIAC meaning group of animals or precisely group of seed principles.

The zodiacal belt acts as a mold for the shape of creation (seed principles) while the Sun and the planets, when apparently passing through those divisions of Zodiac act as lenses which bring down these seed principles onto Earth by superimposing their own characteristics/flavors. This is what is meant by “Sun in Aries does this or Moon in Sagittarius does that, etc.” and this in essence forms a key statement to understand astrology. Let us see what these Zodiacal divisions are.

Divisions of the Zodiacal Belt

In the following, let us briefly name the zodiacal divisions in English/Sanskrit (symbolic item that they represent) ———– their astrological symbol.

Each of these divisions is again divided in three ways based on the properties that they are equipped with:

These three divisions of 12 signs form a basic element of language of astrology. Because their primary attributes depend on SUN, the soul giver, they are often named SUN-Signs. But this does not restrict the idea that every planet’s apparent position in the zodiacal sign has a different effect on the point of observation.

In vēdic scriptures there are almost 33 primary planets under study. But a modern scientifically oriented mind can seriously question this part. The key lies in defining what a planet is. Vēda never defines a planet as “planetary object” – like The planetary globe Venus or planetary globe Uranus, etc. The planets in terms of Vēda are the planetary deities – manifest/un-manifest. If un-manifest, can they affect us? Well, can our thoughts and impulses, which are un-manifest, affect us? The same applies here. Each planet is like our body i.e., it has a planetary deity (akin to our soul) and may have a physical matter (akin to our body).

At any rate, let us concentrate on the planetary deity concept and look at the primary ones along with their symbols in the following.

This second section of planets form yet another element in the language of astrology. So, far far off, we have innumerable stars forming a belt of space, which was divided into 12 and subsequent divisions. These divisions act as molds which work through the planetary principles and descend to the point of observation. Because we often study ourselves, the point of observation is Earth and our own inner-core.

Now, let us come to our immediate surroundings and consider the effects of the above two spheres of perception on this sphere of existence. We, being closest to Earth, its planetary deity has an abundance influence on its own beings, us. That is why we call it “Mother Earth” or “Bhū Dēvi” or “Pruthvi – Land ruled by  king Pruthu”, etc. In actuality, Earth rotates on its axis. But, being in its rotating frame of reference, we see the whole space of perception revolves around us. This creates a motion in the wheel of zodiac to rotate, Earth being its center. There are as many wheels as there are planets and the outermost periphery being the Zodiacal belt. Let us see some splendors of these movements which affect us globally.

The rotation of Zodiac causes particular sign to rise at the east every 2 hours (12 signs – 24 hrs) every day. But this rising sign changes every month, at a particular time on that day. Zodiacal belt is a constant belt. But, because Earth changes its position as it revolves around the Sun, this phenomenon of different rising sign every month, occurs. The rising sign, towards the East, at the time of Birth is called Ascendent/Lagna. More on this in some other post.

Sun also rises every day in the east. But, as the rising backdrop zodiac sign changes, every month SUN rises in a different sign. This creates different splendors of 6 seasons, 12 Months (Māsa), 3 climates, etc. This is the reason for different flora and fauna as well.

The revolution of SUN around the Earth causes 4 points of primary importance (as seen from northern hemisphere/equator) – Equinoxes and Solstices. 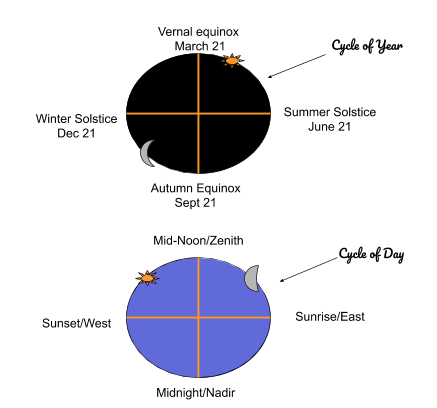 The four points on year-cycle divide the whole year into 4 parts. Each part again has 6 waxing and waning moon phases making a total of 24 (Śukla Paksha and Krishna Paksha) moon phases. A moon phase is interplay of position of Moon and Sun with respect to us. As pointed earlier, Sun – the souls and Moon – the bodies implies their interplay rule majority portion of our life. That is why we have solar, lunar and Soli-Lunar calendars in vogue. Depending on this 24 division of year-cycle, we divided a day into 24 parts. We call the whole day as “A-hōRā-tra” and each of its 24th division as “HōRa” or “Hour“.

There is much more depth to each part of this article. We will slowly go into those details in future. Until then stay tuned 🙂

I pursued my post graduation in Physics from IIT Madras and my PhD in Quantum Physics from Ireland. Along with physics, I have invested my time in understanding spirituality, philosophy, esoteric astrology etc. This blog is the essence of my understanding over the years. Most of my blog articles are strongly inspired from following authors: Master. E. K (My GURU), Sri Aurobindo, H. P. Blavatsky, Alice. A. Bailey, Sir John Woodroffe/Arthur Avalon, Sri Anantacharya (Master. E. K's father), Swami Chinmayananda and many more. I bow at each of their lotus feet for the wisdom they showered upon this world and letting me taste at least a drop of that vast ocean! View all posts by Dr. Tejaswi, PhD

Want to find anything ?

© [K. N. R. Tejaswi] and [https://ardentdisciple.wordpress.com/], [2015-current year]. Unauthorized use and/or duplication of the material of this blog without express and written permission from this site’s author and/or owner is strictly prohibited. Excerpts and links may be used, provided that full and clear credit is given to [K. N. R. Tejaswi] and [https://ardentdisciple.wordpress.com/] with appropriate and specific direction to the original content.

Proud to be a teacher